Will Donald Trump wind up in the coat closet?

Some years ago, a New York Times photographer was at the headquarters of the Democratic National Committee to cover an event.  As he was walking through the building he noticed a portrait hanging in the back of the coat closet. It was a portrait of a man who was once a leader of the Democratic Party. He was the nominee for president twice. He was a former governor of Illinois from a prominent political family. 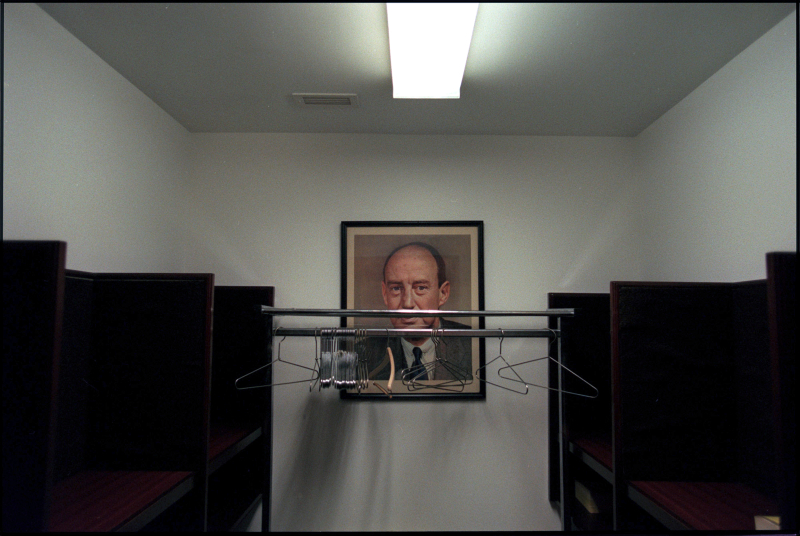 Odds are that few of the folks working at the DNC remembered Stevenson.

Here is a description of him from Wikipedia:

Noted historian Arthur M. Schlesinger Jr., who served as one of his speechwriters, described Stevenson as a "great creative figure in American politics. He turned the Democratic Party around in the fifties and made JFK possible...to the United States and the world he was the voice of a reasonable, civilized, and elevated America. He brought a new generation into politics, and moved millions of people in the United States and around the world."[2] Journalist David Halberstam wrote that "Stevenson's gift to the nation was his language, elegant and well-crafted, thoughtful and calming."[3] His biographer Jean H. Baker stated that Stevenson's memory "still survives...as an expression of a different kind of politics - nobler, more issue-oriented, less compliant to the greedy ambitions of modern politicians, and less driven by public opinion polls and the media."

Stevenson was the party's presidential nominee in 1952 and 1956. He lost both times to Republican Dwight Eisenhower. He later was our United Nations Ambassador.

So how did this prominent member of the Democrat Party wind up in the coat closet at DNC headquarters?

Some of the answer comes from the Pulitzer Prize winning photographer, Stephen Crowley, (my brother). We chat about it in the this week's episode of the podcast High Tops and Politics.  You can hear it on any of these podcast sites.

ITunes   https://apple.co/2ZrCIWU
Google Podcast  https://bit.ly/2FgrIEl
Spotify  https://spoti.fi/2XjpfmH
Stitcher  https://bit.ly/2XQtiDP
Which brings me to President Donald Trump. Today, he is in Orlando to officially launch his reelection bid. While all presidents have enormous egos, otherwise while else would they think they could be president, Trump seems to stand alone. And he clearly puts tremendous energy in crafting and guarding his image.
But one wonders is Trump's greatest fear winding up in the coat closet?
This is what I wrote shortly after he took office.
The Teenager Haunting Donald Trump

Everything changed for Donald Trump on inauguration day. After spending most of his 70 years carefully cultivating his image, America’s 45th president has turned his life over to an unknown teenager.

Each morning, Trump begins his day looking in the mirror seeing a man of importance, power and great wealth. It is an image he cherishes. Woe betide those who might challenge that image. He is, in his view, simply fabulous. Unmatched in street smarts and education. And in case you doubt, he repeatedly reminds you just how smart he is.

Trump’s image is everything to him. The only way he could lose the election would be if it was “rigged.” The only way Hillary could win more votes is if there was fraud. Just weeks into his presidency Trump sees himself on Mount Rushmore. He is, in his view, already one of America’s great presidents.

Should there be any failures in his White House (Michael Flynn comes to mind), it will certainly not be his fault. He will have been decisive. Trump will take credit for directly firing Flynn whether he did or not.

And Trump will continue to do all he can to build his family’s wealth. He has no choice. He can’t look in the mirror and not see someone who is fabulously rich. For him, the measure of success is not merely holding one the most powerful offices on earth - he must remain executive producer of Celebrity Apprentice.

That teenager may disagree.

Somewhere, there is a teenager who is just now becoming fascinated with American politics. This teenager is reading history, studying past presidents, and curious about the current one. Over time, this teenager’s interest will grow. College will broaden that interest. Perhaps a graduate degree in American history. Authors like Robert Caro and David McCullough, Douglas Brinkley and Richard Neustadt may inspire.

And sometime, perhaps toward the middle of the 21st Century, this teenager, now middle-aged, will have completed the first successful biography of President Donald J. Trump. It will be written with the passage of time. The ferocity of the moment will have passed.

While the early signs of Trump’s presidency suggest history will not look favorably upon him, the fact is at this point we still do not know. And neither does Trump.

This may be the thing that will scare Trump more than anything. One morning, standing in front of that mirror, he may realize that after decades of creating a public image, he has left it in the hands of others he will not be able to control.