Jeb Bush should stop talking and start running for the Senate 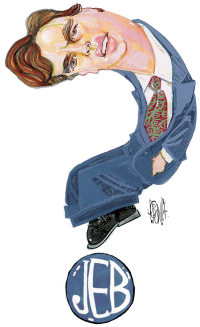 Sometimes the saddest thing is watching a politician who has been booted from the stage. No matter how happy they say they are, one can always see the longing to be back. Sometimes they run again. Sometimes they pontificate from the sidelines, with fewer and fewer people paying attention. Jeb Bush has been doing a lot of pontificating lately.

He is clearly still ticked off at his humiliating 2016 defeat. He has the good fortune of being able to blame his loss on Donald Trump, a character he breezily dismissed when much of the Republican world presumed Bush would be their nominee.

One can only imagine how it felt when in the early debates he stood center stage and then as his poll numbers dropped found himself standing further on the edge while Trump took his place at center stage.

Partly, Bush continues to blame Sen. Marco Rubio.  In the Bush world, once Jeb decided to run, no loyal Florida Republican would dare to challenge him. Rubio, considered at the time one of the leading figures in what many believed would be a new GOP, saw no reason to stand aside for his elder.

During an interview with USA Today's Alan Gomez, Bush, talking about immigration, said, "God forbid you actually took on something that was controversial and paid a political price. That's the  attitude in D.C. right now. Certainly Sen. Rubio is no different in that regard."

During a podcast with The Federalist, Bush chastised Rubio again. "When you're that talented and knowledgeable about subjects you need to step up," said Bush. "I think he's being too cautious."

So about that stepping up stuff. Perhaps, it's time for Bush to step up. Chirping from the sidelines makes him sound more like a parent yelling at the umpire during a middle school baseball game.

Bush needs to "step up" and stop "being too cautious" and get back in the game.

Bush has two opportunities. He could run for the U.S. Senate where he could show Rubio how to be a Senate leader. Of course, Bush would have to take on Florida Governor Rick Scott, who everyone expects to run against incumbent Democrat Bill Nelson. (Note: I have heard one rumor that Scott may decide against running. If true who could blame him).

His second opportunity is to run for governor. Yes, yes he can. Look it up.

Imagine the impact of Bush announcing for either office. Could he win? That is less certain. The Bush machine is broken. Memories of him as governor have faded since his departure from the governor's mansion 11 years ago. Those who remember his 2016 campaign, would rather forget it.

But I understand him well enough to know that Bush does not want 2016 to be for what he is remembered.

So perhaps Bush should stop sounding like a cranky retiree (he will be 65 next month), and look to getting back in the game in the 2018.