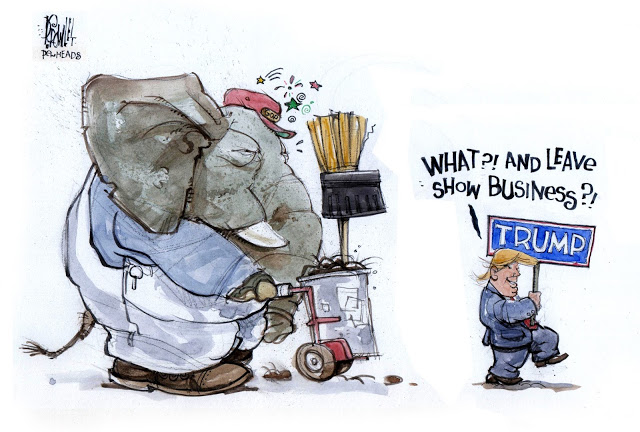 Jeb Bush has said he has no intention of voting for Donald Trump or Hillary Clinton. It is a silly and disturbing notion.

Florida’s 29 electoral votes will decide whether Trump or Clinton will go to the White House. It will be an extremely close race with a Florida victory squeezed out by the smallest of margins. Recent polls suggest a slight Trump lead or a statistical tie.

There is a very reasonable chance that Trump could win Florida and with it the White House. If you merely look at the race in the style of the soulless Republican National Committee Chairman Reince Priebus, a Trump victory is merely a win for the GOP and the name on the White House mailbox matters little as long as it belongs to a Republican.

Some Florida Republicans are repulsed by the idea of Trump leading the GOP and they have actively, if so far ineffectively, been part of the NeverTrump movement.

Meanwhile, Jeb Bush has been largely silent. He will tweet on occasion about issues that interest him. Bush took some time off to do a skit with Jimmy Kimmel for a pre-Emmy Award show. (He was very good, acting an out of work Uber driver).

Sitting on the sidelines since quitting his own presidential bid, Bush seems to be content essentially telling voters – you picked a lunatic over me, live with it.

The middle child of the Bush family needs to get over it and step up for Florida and his party. It is unconscionable that Jeb Bush would abandon the party when it needs him most. His family has been deeply involved in the GOP since his grandfather, Prescott Bush, was elected to the U.S. Senate from Connecticut in 1952.

If he believes, as many establishment Republicans do, that Trump would be the destruction of the GOP, how can Bush remain idle? Was his campaign for president an ego-trip or a belief that Republican Party principles are better for the future of the nation?

Despite these public friendships between the Bush and Clinton families, Jeb is the moody outsider who can’t bring himself to publicly support Hillary Clinton.

Yet, perhaps the last, most notable public service Bush could perform in this election would be to endorse Hillary Clinton.

As already stated, Florida will be won by a small percentage of votes. Bush does not have the political power in the Sunshine State he once held, but in a race this close, he could have an impact. His endorsement could free others to publicly abandon Trump – perhaps even U.S. Sen. Marco Rubio who still harbors presidential ambitions.

Jennifer Rubin, a conservative columnist for the Washington Post and a Bush admirer, wrote last week:

No matter what Hillary Clinton’s faults — and they are many — it is hard to seriously argue that a man who would lead a racist conspiracy theory and then try to blame his opponent is fit to be president.

Trump, like a small child caught misbehaving, simply denies the evidence or blames someone else or lashes out in anger.
(He also this weekend called former defense secretary Robert Gates a “clown” in response to Gates’s well-reasoned argument that Trump is unfit to serve as commander in chief.)

Again and again he’s proven his views so extreme (e.g., rounding up 11 million people), his judgement so egregious (e.g., embracing Vladimir Putin) and his character so twisted that only someone in deep denial or blinded by partisanship could defend him and insist he is worthy of the office.

As for the fate of the GOP, the evidence mounts that it cannot go merrily on its way after the election. A party that would sanction people who call out a racist deserves to go out of business. A party whose congressional leaders remain supportive of a nominee who incites violence, perpetuates racism, blatantly, and traffics in conspiracy theories loses the moral authority to govern.

Rubin’s challenge can also be aimed at Florida’s 43rd governor.

Bush promised if he was elected president he would be a strong, decisive leader. This is one of those historic moments that test that premise. Bush could join forces with those Republican who believe saving the party for generations to come means abandoning the party’s nominee.

Or, Bush can continue to do nothing even in the face of Priebus’s warning Sunday on CBS Face the Nation that Bush’s failure to endorse Trump could cause the party to prevent him from running for president again.

Priebus is making this threat to a man whose family elected two presidents and has been a major part of the GOP for more than 60 years?

Bush can help decide this election by helping Clinton in Florida. Should he? Can he live himself if Trump wins the White House and he did not do everything he could to stop him? Does he have the courage of his father who is apparently ready to vote for Clinton?

Or is Bush content to just point his finger at voters and say – you got what you deserved.

Agree from the first sentence.
One of the academic writers from http://termpaperhub.com/ claimed: vote for less evil. And this should be desperate advice.