Poll showing Francis Rooney ahead was done by his campaign consultant

The "poll" was done by an organization called Remington Research Group.

Pray tell - who is that?

According to Florida Politics, the Remington poll shows that:  Rooney leads the pack with 45 percent of the vote. Chauncey Goss is in second with 29 percent, while Dan Bongino received 15 percent support. The poll found 11 percent of respondents were still undecided.  . . . Remington Research Group surveyed 1,606 likely Republican primary voters in Florida’s 19th Congressional District from Aug. 14 through Aug. 15.  The automated survey has a margin of error of 2.4 percent.

But pray tell - who is Remington?

A bit of Googling led us to discover that Remington Research Group was founded by Jeff Roe who most recently gained fame for managing Ted Cruz's presidential campaign. He is also the founder of Axiom Strategies based in Kansas City, Mo.

Roe is rapidly becoming one of the Republican Party's most sought after political consultants.

But pray tell - what does this have to do with the Remington poll?

Well a visit to the FEC website for Francis Rooney campaign expenditures came up with this: 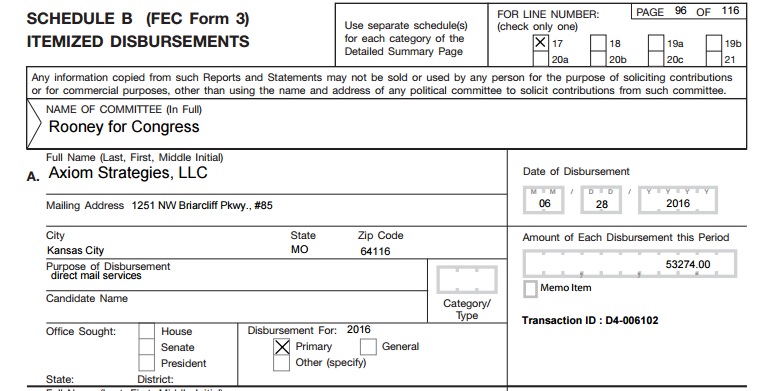 Yup, Axiom and Remington are both owned by Rooney's campaign consultant.

So forgive us if we don't find the Remington poll to be worth much as polls go....although it appears to be worth at least $60,774.

You can read the Florida Politics report here.  Less than an hour after offering its readers the Rooney poll, Florida Politics began reporting that it has "obtained" a poll for the district 18 congressional race. No source is named. So we'll pass. But if you are interested the link is here.

I loved as much as you will receive carried out right here.
The sketch is tasteful, your authored subject matter stylish.

So, I didn't pay attention... was the poll accurate?

Wish the general public was more educated about polls.

Roony is no "outsider" he has made millions illegally from government contracts meant for small and/or minority businesses.
His TV ads are misleading at best and outright lies at worst. If he were running unopposed, I would not cast my vote for him.