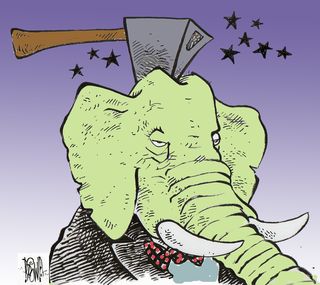 Are Florida Republicans a leaderless party?

Who is the leader of the Florida Republican Party?

Or – are Florida Republicans so fractured that there is no single leader of the party?

Today’s Florida Republican Party is very different than the one Bush took over when he staged a coup in 1994. He showed up in that year’s governor’s race as candidate who had never run for office, had limited campaign experience and a business background marked by notable failures. Like Donald Trump, what he did have was a name everyone knew – Bush.

With the help of his family name, Bush easily pushed aside more established GOP candidates to become the party’s nominee for governor. Bush would narrowly lose that election to incumbent Democrat Lawton Chiles, but the GOP would take over the Senate and the Florida Cabinet. And Bush began his reign has the undisputed leader of the Florida Republican Party.

Today, Florida Republicans are rudderless. The party that Bush ruled with a firm hand for more than a decade, is fractured. The slide began with the election of Charlie Crist as governor in 2006. It’s hard to believe now that at one point Crist was among those being considered to be John McCain’s running mate in the 2008 presidential campaign.

Crist, much like his arch-enemy Marco Rubio, was always a malleable Republican shifting direction as fit his political ambitions. Florida Republicans tolerated Crist because, well, he was governor. And by golly, if a Floridian became vice president that would be swell too.

Bush deeply cared about the machinery of politics. He put his best people in the right places. Crist could care less. He turned the party machine over to the now notorious Jim Greer who plundered the party coffers and ended up in prison. 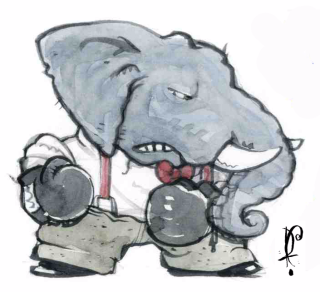 the hard right and opportunity for Rubio. The once moderate Rubio found maneuvering room by suddenly becoming an ardent follower of the emerging Tea Party movement. Many establishment Republicans laughed at the notion that Rubio could successfully challenge Crist who decided he would rather be a U.S. Senator than run for a second term as governor.

It was a calamitous moment for the Florida GOP and it began the cracking of party unity.

Rubio became a hero of the Tea Party and as the 2010 primary approached, his ardent followers were overwhelming the GOP establishment. And Republicans who had been lukewarm about Crist suddenly had an opportunity to abandon him

Crist leaves the GOP to run as independent. Rubio captures the party nomination and goes on to win a three way race defeating Crist and Democrat Kendrick Meek.

At the same time, a stranger arrived in town – Rick Scott.

The Republican establishment had settled on Attorney General Bill McCollum for the party’s nomination for governor. But just as Rubio captured the hearts of burgeoning Tea Party movement, Scott sold himself as an outsider with a business background. Scott was Trump before Trump.

McCollum lost and Scott, unknown by the most of the GOP establishment, spent more than $70 million of his own money to successfully become Florida governor after defeating Democrat Alex Sink. In his first months as governor, Scott embraced the Tea Party not the GOP.

And, for the most part, Scott still is not party of Florida’s GOP establishment. Polls showed him doing so poorly during his 2014 reelection campaign, that many Republican lobbyists we planning to attend the victory party of the new governor – freshly minted Democrat Charlie Crist.

Since 2010, Scott has been a party of Scott. He has not needed the Republican Party of Florida. He raises money for his own political committee, Let’s Get to Work. Since 2015, he has raised nearly $7 million. In fact, Scott has very little to do with the state party.

Scott may be a Republican – but is he the party leader?

Rubio’s failed presidential campaign further divided Florida Republicans. The candidate who helped make the Tea Party a major player in the 2010 election, found himself flummoxed by another anti-establishment candidate – Trump.

But even Rubio’s path to being the preferred establishment candidate was thwarted by Mr. Establishment – Jeb Bush. Florida Republicans were emotionally torn by watching Bush and Rubio battle each other. In the end, Bush was humiliated and Rubio licked his wounds and maneuvered himself into position to run for reelection.

Is Rubio the leader of Florida Republicans?

Legislative leaders have taken control of some of the party apparatus but these are folks who are virtually unknown outside of Tallahassee and their districts. Florida’s elected cabinet officers, CFO Atwater, Attorney General Bondi, and Agriculture Commissioner Putnam are ambitious but still without significant statewide bases of support.

The fact is there has not been a strong Republican Party leader since Bush left office in January 2007. And today, his influence is largely marginal.

Rubio foray on the national stage offended many Bushites and they are an unforgiving if diminishing lot. Rubio has many devoted followers but few see him as the leader of the Florida Republican Party.

Republicans could learns something from Florida Democrats. For many decades, the GOP was simply not a factor in the state. Democrats who won primaries almost always won the general election. The result was a party divided into factions. When Republicans finally started winning, Democrats were ill-equipped to confront the challenge in a unified way. Today, Florida’s Democratic Party is largely irrelevant in Tallahassee and has a small footprint in Washington.

For nearly 10 years, the Florida GOP has been headed down the same path.

And now to make things more perilous - like much of the nation, Florida Republicans are deeply divided between Trump supporters and NeverTrump opponents.

When this campaign is over, Florida's Republican Party is going to need a strong, unifying voice.

The problems with the Florida Republican Party are they too close to business ignoring the people, refuse to moderate their positions, and Republican leadership suffer from narcissism. Governor Scott, Bondi, and Putnam kiss the ring of Trump, and are all about advancing their own political fortunes. Florida is the Republican party of me vice the Republican Team. Bondi appears on television seeming sympathetic about the executions at Pulse when we all know she gives not a damn about the gay community. Putnam lays low waiting for 2018, and ignores that fact the Florida's citrus is declining at 20% a year due to greening. What are the alternate crops Mr. Putnam? Silence... Then we have little Marco who can not be bothered to show up for his job, until after being humiliated by Trump, and then deciding he better do something positive for the state. Scott is all about making money for himself and his wife. Scott is pushing ZIKA after cutting the budget for mosquito control. Why? This is a Governor who wants fracking, and an increase in carcinogens in out state's water. Why does he care? Money! Scott's wife owns a mosquito control company. Hey, as long as Republican leadership can advance their own political careers, make money off the people, or control the money flow, there will never be an ethical Republican leadership in Tallahassee. It is all very sad. We the people are watching.