Marco Rubio not really running for a second, 6 year term 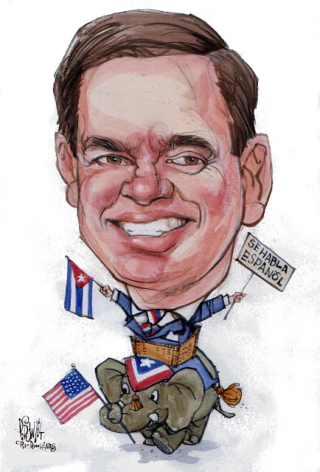 Marco Rubio is asking Floridians to ignore a year of telling them that if he lost his bid for the presidency he would not run for a second term in the U.S. Senate. And Rubio is keeping that promise. How you may ask?

Well, Rubio is not really running for a second, 6-year term. This is a placeholder position for him as he plans his second run for president. So expect that by 2018, Rubio will begin working on the 2020 race. And perhaps by 2019, we'll again get a pledge that Rubio will not run for a third term if he fails to win the GOP nomination.

In fact, Rubio when asked about finishing a second term, would not commit to doing so. According to the Miami Herald, Rubio: made no commitments about his future ambitions, declining to say if he’d serve a full, six-year term or run again for president in 2020 — or 2024.

“What I’m done making is unequivocal statements about anything at this point,” he said. “I don’t even know who the next president’s going to be. But I will say this to you: If I wanted to run for president in 2020, running for re-election in 2016 was probably not the best choice to make politically."

Rubio always couches his political moves in the womb of noble political sacrifice.
There is nothing wrong with the raw ambition and political calculating that Rubio embraces as he continues his dream of being president. And perhaps he had a moment of doubt after dropping out of a brutal presidential campaign.
But make no mistake, Rubio sees the Senate as a path to the White House - nothing more. And that's okay. If Floridians would like to see him succeed, they should support him in that endeavor.
Rubio's official statement is below:

In politics, admitting you’ve changed your mind is not something most people like to do. But here it goes.

I have decided to seek reelection to the United States Senate.

I understand my opponents will try to use this decision to score political
points against me. Have at it. Because I have never claimed to be perfect, or to have all the answers.

Still, the people of Florida deserve to know why I’ve changed my mind.

I have often said that the U.S. Senate can be a frustrating place. And it’s true. After witnessing the gridlock that grips Washington, I think just about every American – Democrat or Republican – would agree.

But the Senate is also a place from which you can perform great services for the people you have the honor of representing. And I am proud of the work we have done to help thousands of Floridians over the last six years.

The Senate can also be a place from which great policy advances can be made. I am proud that we have done that too.

But as we begin the next chapter in the history of our nation, there’s another role for the Senate that could end up being its most important in the years to come: The Constitutional power to act as a check and balance on the excesses of a president.

There’s also something else. No matter who is elected president, there is reason for worry.

The prospect of a Trump presidency is also worrisome to me. It is no secret that I have significant disagreements with Donald Trump. His positions on many key issues are still unknown. And some of his statements, especially about women and minorities, I find not just offensive but unacceptable. If he is elected, we will need Senators willing to encourage him in the right direction, and if necessary, stand up to him. I’ve proven a willingness to do both.

In the days ahead, America will continue to face serious challenges – the possibility of terrorist attacks at home and abroad, a declining military, anemic economic growth and low wages, assaults on our rights and values, outdated health care, education and pension programs in desperate need of reform – that face backward or uncertain responses from either Clinton or Trump.

No matter who wins the White House, we need a strong group of principled, persuasive leaders in Congress who will not only advance limited government, free enterprise and a strong national defense, but also explain to Americans how it makes life better for them and their families. I ultimately changed my mind about this race because on that front, and in that fight, I believe I have something to offer.

In the end, this was a decision made not in Washington, but back home in West Miami over Father’s Day weekend, with my wife and our four children.

There were two paths before us. There was one path that was more personally comfortable and probably smarter politically. But after much thought and prayer, together we chose to continue with public service; to continue down the path that provides the opportunity to make a positive difference at this critical and uncertain time for our nation.

In the end, there was simply too much at stake for any other choice.