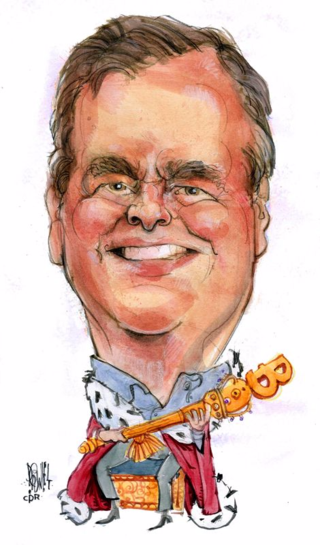 Never doubt that Jeb Bush is taking his humiliating defeat for the Republican nomination very personally. His endorsement of Ted Cruz says more about Bush's anger at how Donald Trump pushed him out of the presidential race than his sudden love for Cruz. And Bush's decision not to endorse Marco Rubio before the Florida primary was little more than petty revenge because Rubio dared to run against him.

If there remained any pretense at all, and there was very little left even before the campaign, that Bush remained a leader of the Florida GOP, his decision to back Cruz removed the last vestige of it.

Bush never really thought very much of the average Florida Republican. They were there to be instructed and led. Disagreement with Bush wisdom was at your own peril.

Many believe Bush's aim is to thwart Trump by helping establishment Republicans rally around Cruz in the hope of a brokered convention.

Does anyone seriously believe that Bush thinks Cruz should be president?

We certainly know he doesn't want Trump in the Oval Office.

And does anyone doubt that Bush believes Kasich is more qualified than either Cruz or Trump?

One telling part of Bush's endorsement was his proclamation it was for the “sake of our party and country.”

Interesting that he put party first.

During the campaign, Bush repeatedly said he would support the Republican nominee.

Does Bush still intend to do that - even if it is Donald Trump?