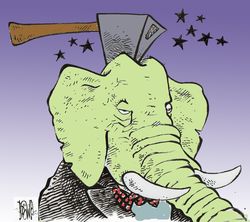 Well this can't be good. Ben Carson admits today to Politico that he lied about applying to and being accepted to go West Point.

Carson campaign manager Barry Bennett, in an email response to Politico, writes that, “He was introduced to folks from West Point by his ROTC Supervisors, They told him they could help him get an appointment based on his grades and performance in ROTC. He considered it but in the end did not seek admission.”

Politico reports:  The academy has occupied a central place in Carson’s tale for years. According to a story told in Carson’s book, “Gifted Hands,” the then-17 year old was introduced in 1969 to Gen. William Westmoreland, who had just ended his command of U.S. forces in Vietnam, and the two dined together. That meeting, according to Carson’s telling, was followed by a “full scholarship” to the military academy.

West Point, however, has no record of Carson applying, much less being extended admission.

Carson, who lives in West Palm Beach, across the lake from Donald Trump's Mar-a-Lago, is leading Trump or tied with him in many of the recent Republican presidential campaign polls.

This week has seen Carson facing many questions about stories he has told about his life, including tales of trying to stab a "close relative" and threatening to hit his mother with a hammer. Both incidents Carson says took place when he was 14,

A noted surgeon, Carson faced questions about these other stories following a CNN report suggesting that there was little truth to Carson's claims of being angry teenager at tines out of control.

Carson said today the CNN report was filled with "lies" and was "pathetic."  See the CNN interview here.

Carson's strong defense of his narrative on CNN is now a tad tainted with Politico's revelation that Carson has lied about his past.

How will his supporters react? And how will the other candidates react?

He, nor his campaign "admitted to lying" about West Point. His campaign answered a question.

Furthermore, Politico made it clear the young Carson spoke with the General who said his grades and performance essentially constituted guaranteed admission to West Point.

Give the man the benefit of the doubt, people. This isn't Brian Williams-esque. How about you do some deep reporting on the Clinton Foundation?