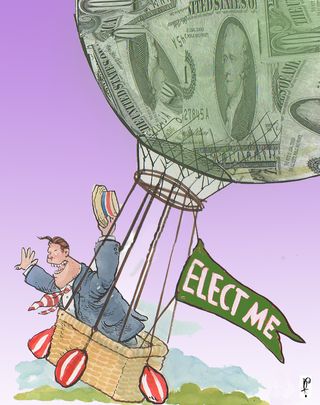 One could certainly argue that with the Bush family connections he was bound to raise more money than Rubio. And the Rubio folks have been quick to point out that he has $11 million in the bank while Bush has $10 million.

In a message to donors, Bush campaign manager Danny Diaz highlighted what he sees as the campaign status at this stage:

·      We raised $13,384,832 in the third quarter, which is double what Senator Rubio and Carly Fiorina raised in the same time.  In the same period in 2011, Governor Romney raised $14.2 million, despite having a much smaller field of competitors.

·      The last month of the quarter – September – was our best. We continue to have strong fundraising in October, including events today and tomorrow, which we expect will approach $1 million.

·      We have more than $10 million cash on hand in primary dollars alone, and that comes after substantial investments in data and grassroots operations across the February and March states, as well as paid advertising in New Hampshire

·      The Right to Rise Super PAC has $33 million reserved for advertising in Iowa, New Hampshire, and South Carolina.  The only other committee with reservations that even approach that amount is Senator Rubio and The Associated Press recently reported that with his current cash on hand he “cannot afford the space he has reserved.”

·      Secretary Hillary Clinton is putting together a massive data and grassroots operation that her campaign believes will be pivotal and determinative in the outcome of the general election contest.  Any campaign that is legitimately seeking the presidency must be able to compete with the Democrats.  There are very few GOP campaigns committed to building a real infrastructure and among those we are confident ours is best in class.  Some highlights in data and grassroots organization:

·      We have a database of approximately 260 million individuals with about 3,000 data points (e.g. hunting interest, magazine subscriptions, online habits, etc.).  We also have more than 30,000 tags built off of previous identification efforts and have made hundreds of thousands of calls into early state voters.

·      This data is being used to provide detailed MicroTargeting profiles of voters in key primary states.  We know exactly which Republicans are the most likely to vote and what issues matter to them

·      We are running thousands of simulated Election Days using the data we have collected in order to game out different scenarios and better allocate resources.

·      We have hundreds of volunteers who have already committed they will travel to the early states to turn out the vote for Jeb.

o   Nevada – 8 paid staffers, 2 offices – “When you ask voters in Nevada which campaign they are hearing from, the most common answer is Bush.”

·      We are going to build on this formidable organization in the early states, increasing staff and resources there as we approach the caucuses and primaries.

·      We’ve also invested in March states. CNN as well as other outlets have reported on our on-the-ground presence in SEC states and other key early battlegrounds, such as Illinois and Michigan.

·      Voters in Iowa and New Hampshire are notoriously late deciders.  In 2012, Rick Santorum won Iowa having just 2% in October.  In New Hampshire, exit polls showed 46% made their decision the week before the election.

·      This is a state-by-state campaign and, in New Hampshire and Iowa, the most recent public survey has us leading the other candidates who have previously held public office (3rd in NH, 4th in IA) including Senator Rubio and Governors Kasich and Christie, who have all had substantial paid advertising on their behalf in the early states.

·      And when looking at the key attributes in deciding whom to support, Jeb stands head and shoulders above most other candidates.  For example, 78% of Republican primary voters say Jeb “has the right kind of experience to be president”, 76% say he is “honest and trustworthy” and 76% say he “has the right kind of temperament and personality to handle an international crisis.”

·      Political scientists have noted that there is no better predictor of who the ultimate nominee will be than political endorsements.  Jeb continues to dominate this category

o   Jeb has the highest number of endorsements of any candidate in the Republican field.

·      With the bulk of the ballot access deadlines occurring later this fall and early next year, our campaign is laying the groundwork now to qualify for every ballot and compete for every delegate.  Organization and ground game are important.

·      In 2012, Rick Santorum surged in March, but he hadn’t done the legwork required in October, November and December to qualify delegates for the ballots in Illinois and Ohio.  As a result, he went into those contests with one hand tied behind his back as he was not eligible for a significant chunk of those states’ delegates.  In Virginia, only Ron Paul and Mitt Romney were able to file the required number of signatures in December to qualify for that state’s March primary ballot

·      We were first to file our signatures to qualify for the Vermont primary ballot, beating even home state Senator Bernie Sanders.  In Kentucky, we were the first to file our caucus qualification check and paperwork, securing ballot access before Senator Rand Paul

·      Our campaign has deployed personnel into the field and mobilized volunteers to gather signatures in states such as Vermont, Delaware, Alabama, Virginia, Indiana, Illinois and Alaska.  In addition, we are recruiting delegates in Alabama, Tennessee, Illinois, Pennsylvania, New Jersey and Ohio – states where delegates are elected directly on the ballot.  We were the first campaign to recruit a full slate of Tennessee delegates.

Jeb is the candidate in the race with the best record of proven conservative reform and as voters learn about that experience coupled with his policy ideas, they will continue to be drawn to the candidate who can beat Hillary Clinton and disrupt a broken Washington.  We are extremely grateful for your continued support in that effort