Jeb Bush forced to cut staff as campaign falters, is dropping out next? 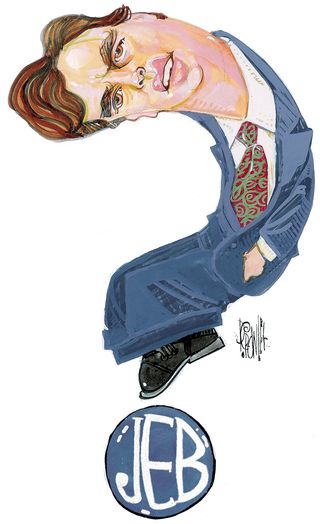 Things are looking grim for Jeb Bush's campaign. He is laying off staff and cutting salaries while he struggles to woo Republican voters. Even Florida, where is ran three races for governor - losing one and winning twice, is looking grim.

Recently national and state polls have Bush in singles digits. Even in Florida he is coming up fourth. Donors are nervous. Supporters are having second thoughts. The campaign is in damage control.

One long-time Bush acolyte now thinks Bush may quit the race by the end of the year.

Another, believes Bush cannot surpass Marco Rubio. Another laments that maybe people were right when they said voters would not support a "third Bush."

The most surprising thing about conversations this week was the number of people who wondered if Bush would finally call it quits.

"There comes a point where you just have to accept the reality that maybe this is not going to happen," said a Washington GOP consultant.

No one wanted to be named because they still have deep feelings for Bush and wanted to be free to speak candidly.

Part of Bush's problem has been his own flubs on the campaign trail - the most recent being his description of Supergirl as "hot." Generally not the kind of think presidential candidates say - although that seems pretty mild compared to some of Donald Trump's more outrageous statements.

And then there is this new ad from Right to Rise, the Bush PAC.  It features a number of former Florida elected officials and lobbyists, yes lobbyists, who say Bush was just swell as governor. Even some of the former officials are now lobbyists.

Now how do you campaign about "changing Washington" with an ad featuring lobbyists praising you?

Here is the ad:

Below it the campaign's explanation for the firings and other changes. It reads a lot like any company announcing "restructuring" and promising that all will be fine after the changes are completed.

From the Bush campaign:

• Jeb is in this race for the long haul. We have made investments that have allowed us to do what serious, national campaigns must do to be competitive in the primary and general elections, including:

• Growing a real ground game in the early primary and caucus states; • Building a sophisticated data and digital operation; • Rolling out a serious policy agenda; • Getting on the ballot in every state in the nation.

• It’s no secret that the contours of this race have changed from what was anticipated at the start. We would be less than forthcoming if we said we predicted in June that a reality television star supporting Canadian-style single-payer health care and partial-birth abortion would be leading the GOP Primary.

• Ensuring we are in the most competitive position possible in this unpredictable field requires we remain as deft as possible, making strategic decisions quickly and intelligently.

• We are in this campaign to win. We will take every single step necessary to ensure Jeb is the Republican nominee and next President of the United States. We are unapologetic about adjusting our game plan to meet the evolving dynamics of this race to ensure that outcome.

• In order to achieve this end, the campaign is making aggressive changes to our campaign structure, putting as much money as possible into voter contact, and winning primaries and caucuses.

• Over the last four months, our team has consistently reviewed our budget and made spending reductions, including: budget cuts by department and salary reductions to senior and mid-level staffers.

• Today, we are expanding those reductions in order to maximize our resources where they matter most: voter contact and personnel in the early states to ensure we can be successful in the primaries and caucuses.

• To achieve that objectives we are making the following changes:

• Reducing payroll costs by 40% this week;

• Cutting salaries across the board, with all but the most entry level staff taking cuts;

• Downsizing our headquarters staff: 25% is remaining in headquarters, 25% of our staff is already in the states; the vast majority of the remaining staff is being offered a position in the early states or as part of our ballot access efforts at a reduced salary;

• We continue to have a strong national finance operation that will ensure Jeb remains competitive by every measure, through the primary and onto victory next November. Just last week announced that we had raised more than $13 million for the third quarter with $10 million in the bank, and continue with aggressive fundraising today and moving forward.

• We already have the most extensive field operations in all four early primary states, and as we now move closer to voting season, we are going to grow the further.

• Nevada – 8 paid staffers, 2 offices – “When you ask voters in NV which campaign they are hearing from, the most common answer is Bush.”

• With staff deployments from headquarters, we are placing a special focus on increasing our New Hampshire operation – already the most significant in the field – to ensure it remains that way, from now until February.

• Iowa, New Hampshire, South Carolina and Nevada can expect to see more visits from Jeb and longer trips. We will use the campaign’s best asset – Jeb Bush – and put him in front of as many voters as possible.

Strategic Positioning: Jeb Can Fix It

• For these operational changes to be successful, we recognize the need to better emphasize the arguments surrounding Jeb’s record and adjust the campaign’s strategic positioning.

We’re going to focus the argument of this campaign around the fact that after seven years of incompetence, corruption and gridlock in Washington, we need a president “Who Can Fix It.” And Jeb is the only person in the field on both sides of the aisle who can make this statement.

Jeb is the one candidate with a proven conservative record, bold ideas and the strong leadership needed to fix the problems America faces. We will aggressively drive that message, against opponents who have either created the problem, proven incapable of fixing it or cannot be trusted. Jeb is the one who can do the job.

Jeb will increase the emphasis on the need for a strong, experienced leader who will rebuild our military and have the resolve to defeat the terrorists. Hillary Clinton’s disastrous tenure as Secretary of State leaves her extremely vulnerable to an electorate looking for the United States to restore its leadership role in the world.

As governor, Jeb Bush issued more than 2,500 line item vetoes totaling more than $2 billion, which includes millions of dollars in earmarks pursued by Florida legislators. Under the current administration, spending has exploded and the debt has risen to unsustainable levels and Jeb is the only candidate who can credibly argue he will rein it in and turn it around.

• The release of Jeb’s e-book in a couple weeks will be another opportunity to revisit his strong leadership in Florida and show that if he could fix it in Florida, he can fix Washington.