Florida Senate goes Back to the Future

In Tallahassee, some things never change. The current struggle for power in the Florida Senate, the driving undercurrent of redistricting, is all too familiar.

Consider this Associated Press report: The squabbling Florida Senate is finally getting down to the serious business of reapportionment with the disquieting realization this normally bloody process will be immeasureably complicated by the Senate’s internal power struggle. 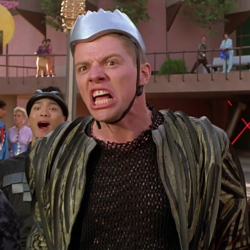 Much of what was happening then, is happening now. A battle over the Senate presidency.  A possible coalition of Democrats and Republicans. A fight over Senate terms.  Much of the work done in secret. Egos replacing public policy.

In 1982, the Senate President, Pensacola’s W.D. Childers was under siege. His former roommate, Panama City’s Dempsey Barron was at war with him. Their battle between the two Democrats was so ugly, two nearly came to blows on the Senate floor. The physically imposing Edgar Dunn got between them.

Barron had effectively taken control of the Senate away from Childers. There were 27 Democrats and 13 Republicans. Barron formed a coalition with the 13 Republicans and 9 Democrats – they became known as the Dempseycrats.

They could not take the presidency away from Childers but the Dempseycrats were determined to control redistricting and ensure that Childers could not be elected for an unprecedented second term – something Childers dearly wanted.

Childers, joined by House leaders, pushed for all Senators to face election after redistricting. He was convinced Barron would lose key members of his coalition. Barron insisted that senators already having two more years in their terms did not have to face reelection.

The case went before the Florida Supreme Court in April 1982. Attorney General Jim Smith, then a Democrat, argued in a 50-page brief, “it seems clear that (the state Constitution) requires four year terms for senators unless it is necessary to truncate a term in order to maintain staggered terms. That is not the case in 1982.  Generally neither the equal protection clause nor the right to vote are violated by incumbent senators being permitted (to complete their terms).”

On May 11, the court in a 5-2 decision ruled:  “We hold, consistent with the views of the House of Representatives and Common Cause, that the Florida Constitution, by its provisions, requires upon reapportionment that Senate terms be truncated when geographic change in district lines results in a change in the district’s constituency.”

Numbering of the districts also deeply divided the House and Senate.

Today, we have the same ego-centric squabbles. The Senate is embroiled in a struggle over whether Jack Latvala of Clearwater or Joe Negron of Stuart becomes the next Senate President. Latvala has hinted at forming his own cross-party coalition. Each contender worries that redistricting could cost them votes.

Meanwhile, the House is barely on speaking terms with the Senate.

Florida’s redistricting drama is far from over. In fact, in some ways it has been going on for more than 30 years.