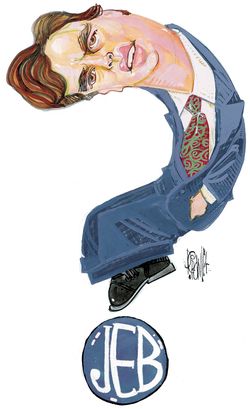 Polls are ruling. Presidential campaigns are being dogged by a constant barrage of polls. And now, a new Quinnipiac poll suggest more Republican voters are supporting Donald Trump than Jeb Bush - in Florida.

It makes for a wonderfully astonishing headline. But it is nonsense.

According to Quinnipiac's numbers, Trump leads Bush 21-17. Let's flip those numbers. The Q-poll is suggesting that 83 percent of Florida's registered Republicans would prefer someone other than Bush.

This would be an incredible collapse for Florida's former governor. It is certainly arguable, and we've made this case before, that Bush's Florida political machine is not what it once was. Certainly the candidacy of Sen. Marco Rubio suggests that Bush's hold on the Sunshine State may not be what it once was.

And it has been 13 years since Florida voters cast ballots with Jeb Bush on the ticket. And he has been out of office since January 2007 - nearly 9 years. As others have noted, Florida's has moved from the 4th largest state to the the 3rd largest since then. Many Floridians have never seen a Jeb Bush campaign.

Still, there a problems with the Quinnipiac Poll. Most media will point to its 3 percent margin of error. But that is misleading. That MOE is for the overall poll. The margin for GOP voters is 4.5 percent. (For Democrats it is 5.3). Those are significant margins that actually suggest Bush and Trump are tied.

Even more troubling is the time frame of the poll. The survey was done from August 7 to 18. That is a very long time. Voter moods can change from day to day. There is no assurance that what a voter said on August 7 would be the same on August 18. When you add the volatility brought by Trump, it is fairly safe to conclude that opinions change rapidly.

And who was surveyed. The polls suggests self-identified registered voters. But it does not appear that the question of being registered was asked. Instead, Quinnipiac asked respondents: PARTY IDENTIFICATION QUESTION WORDING - Generally speaking, do you consider yourself a Republican, a Democrat, an Independent, or what?

Saying you consider yourself a Republican does not make you a registered Republican. And for survey accuracy that is a big difference.

There is little doubt that the Bush campaign is struggling. And there is no question that his home-base may need some tender-loving care. But this poll, and many like it, begs more questions than it answers.

I don't find Bushes fall from grace to be that big a surprise. Except for the "Terri" Schiavo case I didn't find him to be particularly conservative and that was out and out intrusive. His claim to fame was the mere fact that the economy was out of this world and it's hard to screw it up when the legislature is flush with cash each session.

And I personally don't find him that attractive in terms of his personality. I don't get the impression that he's the least bit interested in what the people might think because he's already figured out what it is that they need. Guess what? It's not him.

Not one person in the REC that I'm a member of is a vocal supporter. Every straw poll I've seen since May here in Florida by small groups have reflected that Pluto gets more warmth than Bush with him barely scratching out a vote or two. In contrast there is strong support for Cruz, Walker and Carson and an acknowledgement that Trump has upended the field by talking about an issue the GOP is just too scared to talk about: and that's dumping the freaking illegals and getting them out of the country.

The illegals made their choice, took their chance and now they've been proven to be wrong in the attitude of the American people. I'm more concerned about the 90 million Americans that should be working and the lack of upward wage pressure due to the illegals taking off the books jobs. Bush is on the wrong side of that issue too.