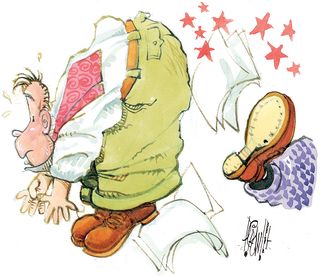 Florida's legislature often embarrasses itself. Petty fights. Petty egos. Petty thoughts. It has been going on for decades.

Part of the problem is that the state Capitol is in Tallahassee. It is so isolated from the rest of the state that when lawmakers arrive it is their parties sent them away to an overindulgent summer camp. These kids are never under control - except by lobbyists.

Now, we have the continuing saga of two grown men battling unmercifully over who gets to be the next Senate president. Republican Joe Negron claim he has the vote and therefore he has won. As reported by Politico's Marc Caputo - Jack Latvala says Negron is full of it.

Let's put this gently - the Senate is full of it.

You mean the guy who lied to the public when he said redistricting would be "the most transparent" in Florida history?

You mean the guy who has been showed to have pulled some of the sneakiest manipulation of the Senate redistricting every undertaken?

You mean the guy who sat smugly on the stand in circuit court insisting he had done nothing wrong?

You mean the guy who led a redistricting effort the Florida Supreme Court called unconstitutional?

You mean the guy who is singularly responsible for spending a small fortune in tax payer dollars to repair the damage he did?

Latavala now preens and acts as if he had no idea - no idea I tell ya - that there were any problems with redistricting. In fact, he suggests that Gaetz kept in the dark. Latvala tells Caputo, he only realized the depths of the gerrymandering now that the Florida Senate admitted its Senate maps were deficient, in a court case.

Now some are suggesting that if Latvala cannot get enough votes in the Republican caucus, he will team with Democrats. This type of coalition has been done before.

Republicans rule Tallahassee. They have super majorities in both chambers.  They hold the governor's office. They have all three Cabinet seats. Democrats have been reduced to tourists.

This year, we have seen the House walk out on the Senate. The animosity between the two chambers is destructive. The governor's office is a wreck of inconsistency. The elected Cabinet is often an embarrassment.

While Latvala and Negron battle over a title few Floridians care about - perhaps they should do this: look at the wall of portraits of former Senate presidents. How many can you name? What do know about them?

After that, Latvala and Negron should sit down and pass the gavel to someone else.