Could Planned Parenthood funding debate lead to a government shutdown 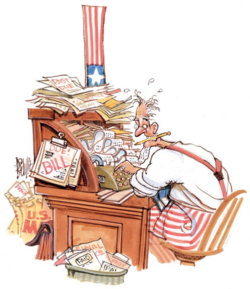 At least one prominent federal budget expert believes that there is a strong chance that the debate over federal funding for Planned Parenthood could lead to a government shutdown.

Stan Collender, a frequently sought speaker on federal budget issues, frequently appears on Bloomberg TV and writes a column for Forbes. He is also a friend of Crowley Political Report.

Collender, who carefully monitors congressional action on the budget, believes that the outcry over videos showing Planned Parenthood officials talking about the sale of tissue from aborted fetuses. The undercover video was shot undercover by an anti-abortion group. Planned Parenthood claims the videos are heavily edited.

Collender says this kind of sharp divide could lead to a government shutdown.

In the past that line-in-the-sand issue has been budget-related: the national debt, the federal deficit and taxes. This time it’s the new GOP push to defund Planned Parenthood – a highly emotional social issue that has quickly become a political litmus test for Republicans.

Republicans are vowing with ever-increasing vehemence to vote against legislation – including a CR — that includes funding for Planned Parenthoodand that means that a continuing resolution that simply extends existing funding at current levels won’t be acceptable to the GOP majorities in the House and Senate. The House and Senate Republican leadership could cobble together a coalition with the moderate members of their own caucus and Democrats, but they would do so by placing themselves and their members in extreme political peril.

This will be more of a problem in the Senate where the four senators running for the GOP presidential nomination will likely fight each other to lead the filibuster that prevents a CR that funds Planned Parenthood from being debated. Given the very little time left before the start of the fiscal year, that filibuster alone could lead to at least a quick shutdown (Fiscal 2016 starts on a Thursday so a short-term shutdown over the two days leading to the weekend plus Saturday and Sunday is certainly possible).

Even if cloture in invoked and the Senate adopts a CR with Planned Parenthood funding, it will still have to be compromised with the continuing resolution that comes from the far more socially conservative House Republican majority that is far less likely to accept it.

In addition, a CR that doesn’t include funding for Planned Parenthood will be filibustered by Senate Democrats.

And the White House has already promised to veto a continuing resolution that cuts funds for Planned Parenthood, and almost no one thinks the votes will exist in either house to override it even if the government closes down as a result.

Collender says that as a result, there is now a 60 percent chance that the government will shutdown.

If he is right, it will be an interesting test for the GOP field of presidential candidates. Read the entire Collender column here.