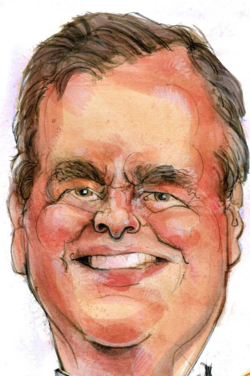 While the column is deep in criticism it is a tad light in outlining solutions.

Some excerpts provided by the Bush 2016 campaign:

Iran’s pursuit of nuclear weapons poses a grave threat to the United States, to Israel, to other close partners in the Middle East, and to international peace and security. There is not yet a nuclear deal with Iran, but I agree with the many experts who believe an agreement is likely. Repeated concessions and desperate accommodation suggest the Obama Administration will do anything to secure a deal. And with America playing such a weak hand, why shouldn’t the Supreme Leader squeeze President Obama for more concessions?

As we await details of the latest concessions the Obama Administration is making to Iran, we should recall the grave danger posed to the world by Iran’s non-nuclear aggression across the Middle East. Without a comprehensive strategy to deal with the totality of Iran’s threats to our interests, the expected nuclear deal is likely to offer only short-term political benefits for President Obama, not lasting security benefits for America.

Iran foments instability and sectarian tension throughout the region. It is a delusion to believe, as the President does, that the current regime in Tehran can be a force for stability in the Middle East. Iran has bankrolled and armed the Assad regime during its war against the Syrian people, and hundreds of Iranian special operations forces are operating as combatants in Syria. Iranian-backed militia have subverted the Iraqi state and helped fuel sectarian tensions that have driven many Sunnis into the arms of ISIL.

The Obama-Clinton-Kerry Iran policy has failed not only because its weak negotiating strategy will not stop Iran from developing a nuclear weapons capability, but also because it has, from the beginning, ignored the comprehensive nature of the threat posed by Iran. The nuclear program is but one symptom of an underlying disease, and the Obama Administration has treated only this one symptom, and ineffectively at that.

Whatever happens in the coming days, America under our next President will have to deal comprehensively with the threats posed by Iran. It must seek to rally the region and the world to pressure Iran to change its behavior. It must demand conclusive proof Iran has not just delayed, but given up its nuclear weapons ambitions. It must develop a strategy not just to defeat ISIL, but also to combat Iran’s malign activities in Iraq and Syria. It must impose meaningful consequences on Iran for its support of terrorism and its abhorrent treatment of its own citizens. It must deny Iran the ability to produce longer-range ballistic missiles that will threaten America and its allies.

All of these challenges will, of course, be exponentially more difficult to address if, by consummating a bad nuclear deal with Iran, the Obama Administration squanders the international consensus and sanctions currently pressuring Iran’s leaders without securing a more fundamental shift in Iran’s behavior.

If this is the legacy of the Obama-Clinton-Kerry foreign policy, it will be a dangerous one for the next President to repair.

Click Here To Read the complete column in Town Hall.