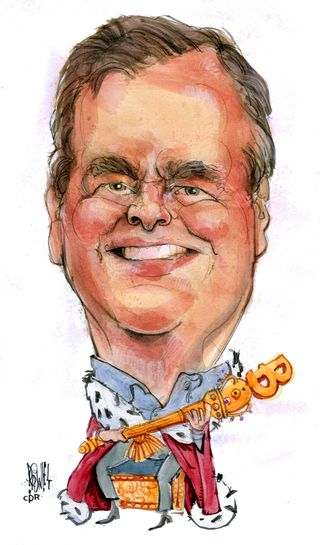 His Right to Rise USA PAC picked up $103 million from more 9,900 donors. And the PAC still has $98 million suggesting that the Bush group is quite stingy - or, as many do, they delayed paying a bunch of bills until after this reporting period.

It goes like this..."Hi vendor/campaign worker, how about delaying sending us that invoice until after July 1."

It is a common campaign stunt. Still, even if there are some millions of in invoices about to land, that's still a huge chunk of campaign cash on hand.

And if you look at the numbers offered by the PAC, a good bit of the money raised came from about 500 donors.

One wonders if Trump is willing to write his campaign a big check.

Here's what Right to Rise had to say:

Later this month, Right to Rise USA will file our first semi-annual report to the Federal Election Commission (FEC).

We are grateful for the overwhelming response from the thousands of donors who have been drawn to Jeb's optimistic message of conservative renewal and reform.

In keeping with our goal of transparency, below is a summary of our preliminary top-line numbers that reflect the total raised by Right to Rise USA from our founding on January 6, 2015, through June 30th, 2015.

Please note that these are preliminary numbers that may change slightly. All data will be available for the public to view when our report is received by the FEC on or before July 31, 2015.