A few moments ago, the Jeb Bush 2016 presidential campaign released a new video and a new, but familiar logo for the campaign.  The "Make a Difference" release and video is the firing of the starting gun for Bush's bid to become the third member of his family to occupy the White House. Bush makes his formal announcement tomorrow in Miami. Crowley Political Report with be there. 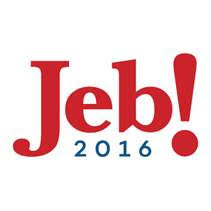 Miami, FL - Today, Governor Bush released a new web video, “Making a Difference,” introducing himself to the nation ahead of his announcement on Monday. The video highlights the impact Jeb Bush had on the lives of countless Floridians as Governor of Florida.

Drawing on first person accounts, the video tells the story of someone who cares deeply about helping people and getting results that allow everyone the opportunity to achieve their dreams.

“Making A Difference” shows that Jeb Bush knows how to fix the problems facing Americans, because he’s done it.

Kim Donatelle echoed Aponte’s sentiment, “I think Governor Bush changed a lot of lives in Florida. I am very grateful that he was our Governor.”

"I said I was going to do these things and I did them, and the result was Florida is a lot better off," says Governor Bush in the video. Leadership is not about "yapping about things…what we need is new leadership that takes conservative principles and applies them so that people can rise up.”

Denisha Merriweather (Jacksonville, FL): My mom, my brother, and my uncle all dropped out of school, by the time I was in the third grade I had failed twice.

Miguel Manrara (Miramar, FL): My first job was picking up garbage and cardboard so I could have some money to feed, to help feed my family, my mother, my father.

Berthy De La Rosa-Aponte (Cooper City, FL): Lucy has autism, she doesn't speak, she doesn't walk, but not being able to speak is not the same as not having anything to say. People with disabilities they want to have freedom, just like anybody else.

Kim Donatelle (Sarasota, FL): One out of four women are going to be victimized by somebody who claims to love them. Domestic violence is an epidemic, this isn't a small problem.

Gov. Bush: The barriers right now on people rising up is the great challenge of our time. So many people could do so much better if we fixed a few things. My core beliefs start with the premise that the most vulnerable in our society should be in the front of the line, not the back. And as Governor, I had a chance to act on that core belief.

Denisha Merriweather (Jacksonville, FL): Governor Jeb Bush instituted the first voucher program in the United States to give low income kids an opportunity to go to a private school. Out of my immediate family, I am the first person to graduate from high school. And then I went on to graduate from college.

Miguel Manrara (Miramar, FL): I am currently an account manager. And the main reason I'm in the situation and the position that I am right now is because Jeb Bush allowed companies like Goya Foods of Florida to grow, to create high paying jobs. I am the perfect representation of the American dream.

Gov. Bush: This is what leadership is about, it’s not just about yapping about things. There are a lot of people talking, and they’re pretty good at it. We need to start fixing things. I said I was going to do these things and I did them, and the result was Florida is a lot better off.

Kim Donatelle (Sarasota, FL): I think Governor Bush changed a lot of lives in Florida. I am very grateful that he was our Governor. I don't think that we would be where we are today, with regards to domestic violence, had he not been the Governor. He wanted women to not live the way that I found myself, it's changed so many lives.

Gov. Bush: I am proud of the fact that many families now have the chance to live lives of purpose and meaning. You can improve the life of people, whether it's in the programs for the developmentally disabled, or changing our economy, or fixing our higher education system. All of these things can be fixed I am absolutely convinced of it. What we need is new leadership that takes conservative principles and applies them so that people can rise up. America's best days are in front of us, and we are going to lead the world.