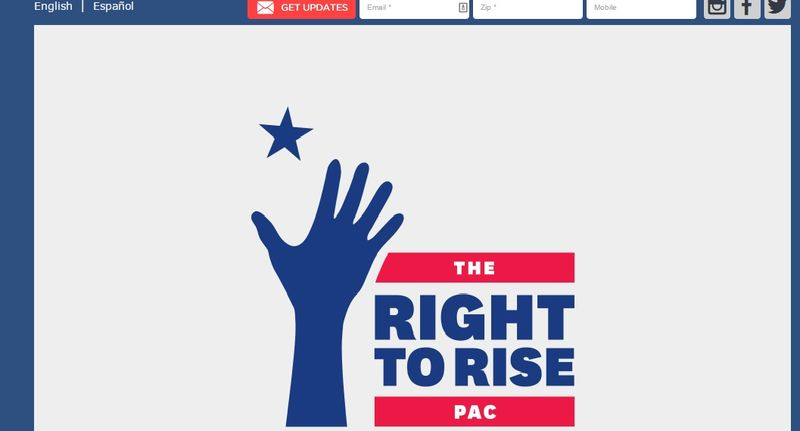 We believe passionately that the Right to Rise — to move up the income ladder based on merit, hard work and earned success — is the central moral promise of American economic life. We are optimists who believe that America’s opportunities have never been greater than they are right now. But we know America is falling short of its promise.

Millions of our fellow citizens across the broad middle class feel as if the American Dream is now out of their reach; that our politics are petty and broken; that opportunities are elusive; and that the playing field is no longer fair or level. Too many of the poor have lost hope that a path to a better life is within their grasp. While the last eight years have been pretty good ones for top earners, they’ve been a lost decade for the rest of America. We are not leading – at home or abroad.

At the Right to Rise PAC, we will support candidates who want to restore the promise of America with a positive, conservative vision of reform and renewal. We believe the income gap is real, but that only conservative principles can solve it by removing the barriers to upward mobility. We will celebrate success and risk-taking, protect liberty, cherish free enterprise, strengthen our national defense, embrace the energy revolution, fix our broken and obsolete immigration system, and give all children a better future by transforming our education system through choice, high standards and accountability. We will strive to put our fiscal house back in order, re-limit government and ensure that America is a welcoming society.

We will not cede an inch of territory — no issues, no demographic groups, no voters — as we unite our citizens to strengthen America through greater economic growth and widespread prosperity.

We believe in the transformative power of conservative ideas to renew America. Our nation can be dynamic and prosperous again, if we join together and fight for every American’s Right to Rise!

Right to Rise offers this biography of Bush (the word conservative is used only three times):

Jeb Bush is the 43rd governor of the State of Florida, serving from 1999 through 2007. He was the third Republican elected to the state’s highest office and the first Republican in the state’s history to be reelected.

Governor Bush remained true to his conservative principles throughout his two terms in office – cutting nearly $20 billion in taxes, vetoing more than $2.3 billion in earmarks and reducing the state government workforce by more than 13,000. His limited government approach helped unleash one of the most robust and dynamic economies in the nation, creating 1.4 million net new jobs and improving the state’s credit ratings, including achieving the first ever triple-A bond rating for Florida.

During his two terms, Governor Bush championed major reform of government, in areas ranging from health care and environmental protection to civil service and tax reform. His top priority was the overhaul of the state’s failing education system. Under Governor Bush’s leadership, Florida established a bold accountability system in public schools and created the most ambitious school choice programs in the nation. Today, Florida remains a national leader in education and continues to enjoy rising student achievement.

After leaving office in 2007, Jeb returned to the private sector, where he reestablished his career as a successful businessman, entrepreneur, and investor.

He has also maintained his passion for improving the quality of education for students by founding and serving as the chairman of one of the nation’s leading conservative education reform organizations, the Foundation for Excellence in Education. The 501c3 non-profit works with state and education leaders, teachers, and parents to develop and implement reforms that lead to rising student achievement.

From 1987 – 1988, Bush served as Florida’s secretary of commerce under Bob Martinez, Florida’s 40th governor. Following an unsuccessful bid for Governor in 1994, Jeb joined forces with the Greater Miami Urban League to establish one of the state’s first charter schools, Liberty City Charter School, in one of the most underserved parts of Miami-Dade County. In 1995, he also co-authored Profiles in Character, a book profiling 14 of Florida’s civic heroes and advocating a return to the principles of our Founding Fathers.

Bush earned a bachelor’s degree in Latin American studies from the University of Texas at Austin. Jeb is the son of President George H.W. Bush and Barbara Bush. He and his wife, Columba, live in Miami and have three grown children and three grandchildren.

You can read more at The Right to Rise PAC.