Home Archives About Subscribe
Does this ad help Rick Scott or Charlie Crist?
NRA once in love with Charlie Crist has a change of heart 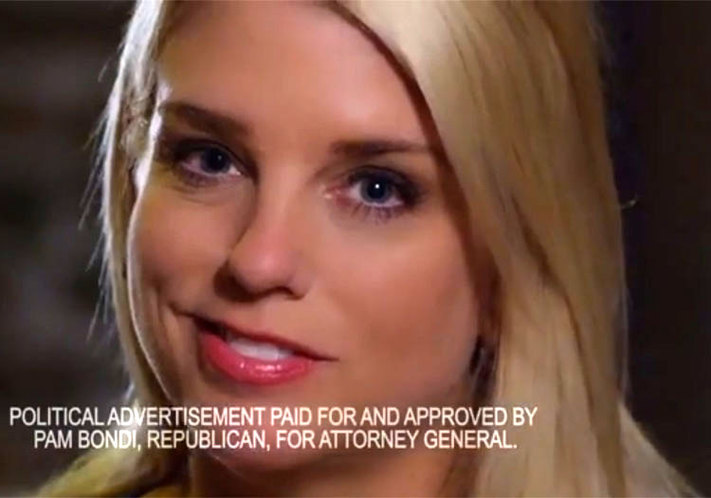 Florida Attorney General Pam Bondi is one of several attorneys general whose relationships with law firms and lobbyists is carefully examined in this New York Times investigation.

Some brief excerpts from this must read story:

Breakfast was served on a patio overlooking the Pacific Ocean — a buffet of fresh baked goods, made-to-order eggs, lox and fruit — as the Republican attorneys general, in T-shirts and shorts, assembled at Beach Village at the Del, in Coronado, Calif.

The group had gathered at the exclusive Beach Village at the Del — where rooms go for as much as $4,500 a night and a special key card is required to enter the private compound — for the most elite event for Republican attorneys general, a gathering of the Edmund Randolph Club (named for the first United States attorney general).

The club, created by the Republican Attorneys General Association, has a $125,000 entry fee — money used to fund the campaigns of attorney general candidates with as much as $1 million, and to pay for the hotel bills, airfare and meals for the attorneys general who attend the events.

Ms. Bondi, the Florida attorney general, for example, received nearly $25,000 worth of airfare, hotels and meals in the past two years just from events sponsored by the Republican Attorneys General Association, state disclosure reports show. That money came indirectly from corporate donors.

She has charged Florida taxpayers nearly $14,000 since 2011 to take additional trips to meetings of the National Association of Attorneys General and the Conference of Western Attorneys General, including travel to Hawaii. Those events were also attended by dozens of lobbyists. Ms. Bondi, in a statement, said the support she had received — directly or through the Republican Attorneys General Association — had not had an impact on any of her actions as attorney general.

The Times story goes on to look at cases that Bondi dropped that the Times suggests were a result of undue influence. Bondi, in a statement, disagreed.