Is this why Rick Scott is skipping a deposition on Friday

Miami Herald reporter Mary Ellen Klas is reporting that Florida Governor Rick Scott is not going to give a scheduled deposition Friday in a lawsuit he initiated.

Gov. Rick Scott is planning to be a no-show Friday for a deposition in a lawsuit he filed in California to block the release of information about Google email accounts used by him and his executive staff.

Attorney Steven R. Andrews was prepared to put the governor under oath in Tallahassee but Scott’s communications director, Frank Collins, said Thursday “there is not going to be a deposition tomorrow.” He could not immediately answer whether Scott's lawyers are asking the judge to have the event postponed or if they plan to ignore it entirely.

However, if the governor is a no-show for a deposition in a case he initiated, it may not be without consequences. According to the rules of civil procedure, if Scott fails to submit to the deposition, the judge could dismiss his lawsuit, order the governor to appear at a later date, or sanction him for refusing to cooperate.

Read more from the Herald here.

Here is one reason Scott might be skipping the deposition - he has a major fundraiser tomorrow with big wigs from the sugar industry, FPL, and other major political donors.

Some of Florida's most interesting political donors are hosting an event Friday to raise money for Governor Rick Scott's reelection campaign and the Florida Republican Party.

"You are cordially invited to an afternoon with Governor Rick Scott along with special guests Governor Jeb Bush, Senator Marco Rubio (and)  Lieutenant Governor Carlos Lopez-Cantera."

The event is at the Biltmore Hotel in Coral Gables - a glorious place where Bush has his private office mere steps from the golf course.

The event chairs include:

We suspect this gathering will be closed to the media.

Wouldn't it be fun if former Republican Charlie Crist dropped by to his old friends? 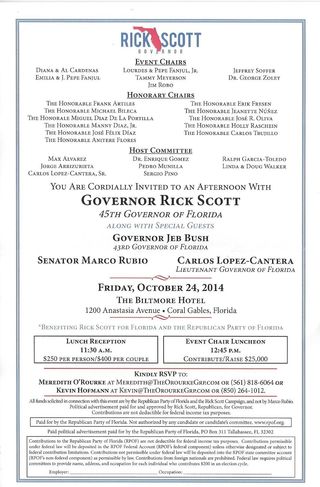 I am confused. Last time I voted for him Charlie Crist was a Republican. What happened to him? Did he change his mind? As Governor of Florida wasn't Charlie Crist the head of the Republican Party of Florida? How does someone who has made it to governor of a huge state as a Republican later become a Democrat? Do you think that Charlie Crist could suddenly change back to a Republican after he is elected Governor? That would make everything the same as it was when he was Florida's Governor the first time. I think that would be very nice. This is making me real nervous. If Charlie is elected again this time he could switch right back to being a Republican. This is very scary. He switched parties after many years once, why can't he do it twice? Skunks don't just change their spots no matter what they say, neither do Republicans. Charlie Crist is probably a Tea Party Republican and wants to infiltrate the Florida Democrat Party and mess it up. That Rick Scott could easily have put him up to it. I am scared to vote for Charlie Crist. You never know what he stands for.

Scott is unethical and a liar. What else did you expect. He is an embarrassment and needs to be voted out, or thrown in jail.

By far, this is the easiest voting decision I have ever made in my
lifetime.. Adrian Wyllie, you have my vote. Also, Bill Wohlsifer