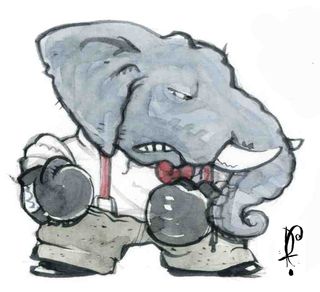 Newt is very ticked off. Big Texas Rick is gone. So is Michele.  And little Rick suddenly looks like a giant killer. Meanwhile, Mitt may have to depend on Florida to win the GOP nomination. Oh, and let's not forget Jon who is hoping to be one heckuva of surprise.

The fun now moves to New Hampshire, a state much different than Iowa. Then on to South Carolina, a state very different from the other 49.

Several of these candidates are likely to survive until Jan. 31 when the Florida Republicans will make the real decision.

Florida. Yup, the Sunshine State is where the action is. No matter what happens in New Hampshire and South Carolina - it is Florida that is going to decide who will be the Republican nominee for president.

The challenge for the remaining candidates is simple. Cash. Lots of cash. As Crowley Political Report has stated before - this is an expensive state. It will cost millions to run an effective campaign, buy the needed TV and radio ads, bother everyone with robocalls, and flood mailboxes with political junkmail.

Florida has more than 4 million registered Republicans. We have nearly as many Republicans in Florida as Iowa and New Hampshire have people (4.3 million).

So it ain't cheap to campaign here - and time is short.

This plays well for Romney. He's got the cash. But then we have the Marco Rubio question. Rubio destroyed the political future of Gov. Charlie Crist on the back of the Tea Party. Those folks are fervent, determined and will show up on election day.

They will not vote for Mitt.

To them, "Romney Care" is as unforgiving an offense as the notorious hug between Crist and President Obama.

Two of the most important questions facing candidates in Florida on January 31 - how many Republicans will show up at the polls and who will they be?

It is important to note that one learns little from Iowa. Only 75 percent of the voters there were Republicans. Nearly all of the rest were independents. A couple were Democrats.

Both New Hampshire and South Carolina also allow independents to vote in their primaries.

Florida is the first pure test.

Only Republicans can vote. And if you haven't registered as a Republican by now, you missed the deadline.

So how many of those 4 million Republican voters will cast ballots? While it is hard to know at this point the number is likely to be as low as 25 percent.

Who will they be?

A large chunk - perhaps the majority - will be Tea Party supporters.

This is not good for Romney.

Opponents will try to portray Romney as a Charlie Crist Republican - a Republican in Name Only - who can't be trusted to carry out the conservative mandate.

That argument is likely to be persuasive to Tea Party supporters.

Romney also opposes the Dream Act - that could hurt him with some Hispanic Republicans.

Romney also is hampered in Florida by the fact that independents can't vote. He has depended on that group to move his campaign forward - and without them, Romney would have been embarrassed in Iowa.

At this point, let's assume that Romney easily wins New Hampshire. That is expected so he gets a shrug from the national media for that. Should he lose New Hampshire or have a weak victory - Romney will be in deep trouble.

South Carolina could be difficult for Romney and if he fails to win there - his only path to victory will be Florida.

Enjoy the spectacle of Florida and South Carolina in the coming weeks but remember they are preliminaries.

The main event is Florida.