Tea Party shows its ugly side during CNN debate 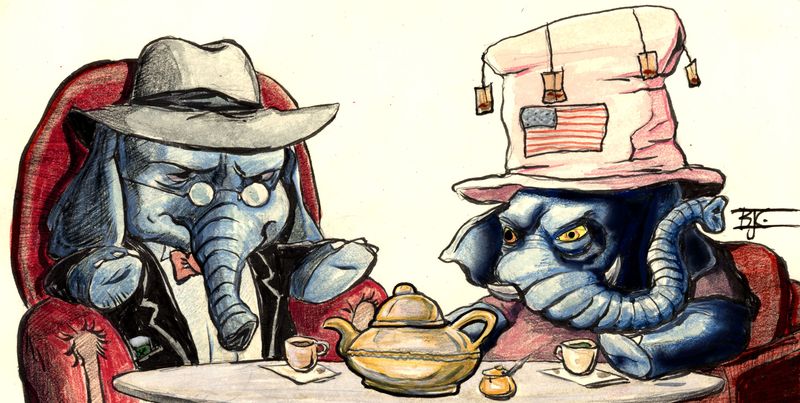 During last night's CNN/Tea Party debate in Tampa, Wolf Blitzer asked Ron Paul a hypothetical question that finally led to: What do you tell a guy who is sick, goes into a coma and doesn't have health insurance? Who pays for his coverage? "Are you saying society should just let him die?"

Some members of the Tea Party crowd shouted, "Yes."

They booed Paul for saying that having U.S. troops in the Middle East contributes to resentments, terrorism and perhaps even 911.

But nothing was more heartless than the shouted "yes" to the idea of allowing someone to die just because they can't afford treatment.

Crowley Political Report was not surprised. There is a hard, uncompromising edge to many members of the Tea Party that has little to do with reasonable disagreements about public policy.

We really wish Wolf had asked a question about Agenda 21 and one world government. Why? Because Agenda 21 and One World Government are a recurring theme at Tea Party gatherings across Florida and the nation.

Why do we care? Because these issues demonstrate just how far some members of the Tea Party are willing to go and how deeply they believe these international conspiracies.

Another reason to care - candidates for public office at all levels are being asked about Agenda 21 and one world government. They cheerfully agree with the Tea Party in an effort to curry their votes. But it is not part of their stump speech.

In short, Agenda 21 is a United Nations global plan for world sustainability that calls on all nations to do all sorts of things that would - in the view of the signers - make the world a better place to live.

Now that is an admittedly grossly oversimplified explanation of what others see as an attempt to bring about one-world government. Agenda 21 is nothing less than a United Nations plot to take over individual property rights, according to worried folks.

Crowley Political Report first reported on this in May when Florida Gov. Rick Scott was asked about Agenda 21 during a radio program hosted by a Tea Party activist.

I know it's not good for Florida and so I'm going to make sure we're not giving someone else the power to figure out our destiny. I'm focused on our rights as an individual state. I don't believe the federal government should be telling us what to do and clearly the UN should not be dictating how we build our state.

In Florida's U.S. senate Republican primary, all of the candidates have been asked about Agenda 21 at Tea Party gatherings.

Here's a typical exchange between at a Tea Party meeting with former U.S. Sen. George LeMieux.

Q – In attending county commission meetings over the past year, our members have been shocked to discover the implementation of global governance throughout all facets of our local government. Terms such as smart growth, green print, and sustainable development indicate UN based policies being implemented locally under the general umbrella of Agenda 21. What do you know about Agenda 21?

LeMieux - Well I’ve been learning about it and I was talking to the Martin County Tea Party folks this week on Friday and they were the first folks who brought this to my attention.

It is very concerning. Look I’m not for international law, I’m for American law. I’m for private property. I’m for you as a man or a woman who was given rights by God to be able to do whatever you need to do as long as you are not interfering with your neighbor. Right?

I will be vigilant and I will look to you to help me be vigilant because these things creep in. They creep in and they come in under things that sound fine. Who’s not for green? Who’s not smart growth?

They sound innocuous but they come with an agenda behind them and I will keep my eye out for them if I have the privilege of going back and I will look to you to help me to be vigilant against those programs.

When you are so deep into a conspiracy that you believe changes to local zoning laws are part of a one world government, UN plot, well, should anyone be surprised these same folks might be willing to let patients without insurance die.

Is this the real Tea Party?

@BSinMA: BS indeed, and vile human being to boot. So drunk on your individualist hubris that you can't even conceive of a patient being in this position without having "taken a risk." I suppose all those with preexisting conditions, or who can't afford health insurance, or the people in your life who've had, say, cancer are accountable for that too?

News flash: the world isn't fair. People succeed, fail, prosper, and die every day undeservedly. Maybe you agree with this. But if you don't value fairness, I'm not sure what the point of living in society is.

If you live in the United States, then you have already taken advantage of at least three dozen government services so far today. Sad thing is, you don't even realize it. The Tea Party imagines it's full of rugged, self-sustaining survivalists. That's neat, but really they're just camping out in their parents' back yard.

You don't have to believe that Agenda 21 is an international conspiracy to conclude it is a bad idea. The fine print requires coordination of zoning decisions with organizations outside those localfolks who know the area. Sustainability policies may be good, may not be but the local citizens should be the ones deciding without interference from federal or international bodies

The question was wrong. It should not have been do you let him die, it should have been do you let him go bankrupt? That answer is a resounding yes! Hospitals don't let people die because they have no insurance. If this young man wanted to take a risk he has to pay the consequences - losing his house,credit rating, car,whatever he has of value. I was so sick during the Obamacare debate of hearing people complain of going bankrupt paying for health care. I'd rather lose my house, than be forced to wait for a life-saving operation for a year under socialized medicine and lose my life. People go bankrupt from buying too much unimportant stuff all the time. Health care is important and we need to treat it as our own personal responsibility, not someone else's.

How dare the Media instigate a fight between our finest GOP candidates! What Morans!

Don't you love how these writers have nothing good to say about the American People? So they character assassinate them in an effort to sell they misinformation? Regarding UN Agenda 21, I do not care what the UN is up to. I care what is going on in my home town with severe conservation restrictions, changes in the zoning board, Open space plans that over regulate property owner rights, so called green communities that get fed and state funds and the taxpayer ends up footing the bill. Side note to the writer, not everyone shares the audiences sentiments. Get a clue.

I thought this very interesting both in the reactions from Dems as well as what was said by some of the TPers.

"let him die" is a very non- christian pro evolution/survival of the fittest stance. I don't think TPers (many which claim christian) and progressives (which many vilify christianity) realize this. It is an exact opposite of their respective views. Biologically speaking, humans have cancelled out many of nature's population controls. We fight hard to save those who would normally be de-selected by nature to survive. This results in 2 problems. 1. Population increase beyond nature holding capacity resulting in damage to the environment. 2. Genetic mutations/medical conditions that would not normally survive not only do so but procreate and pass on the genetic/medical weakness.

It is very interesting to see his complete reversal of positions..though I think many have not realized it as such.