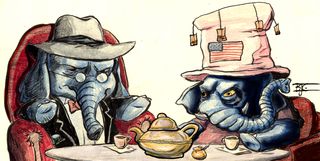 He left Perry drowning in tomato sauce. Cain got 37 percent of the more than 2,500 votes cast. Perry got 15 percent. Romney, who decided not to participate in Presidency 5, got 14 percent.

The sad candidacy of the strident, anti-everything Rick Santorum got nearly 11 percent followed by his political twin, Ron Paul at a tad over 10 percent.

Poor Perry. His swaggering Texas image crumbles in every debate. The delegates may have been disappointed when Perry looked lost at Thursday's CPAC debate, but by golly he bought them breakfast.

Perry told them they were important. He said Florida was important. Shucks,  Presidency 5 was supposed to be a major jumping off point for the Perry campaign.

Is Cain going to be the GOP nominee?

Will the Sunday talk shows go on and on and on about this with dire warnings that Perry better get his act together? (Note: think Ames, Iowa and Michele Bachmann).

Does anybody at this point really understand what is going on with Florida Republicans?

Is the Florida Republican Party being taken over by the Tea Party?

And who is the leader of the Florida Tea Party?