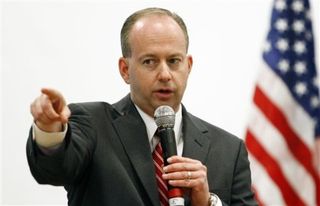 Florida Republican U.S. Senate candidate George LeMieux was on the Lisa Macci radio show recently when a woman caller had an urgent notice for the former interim senator.

"The main thing I wanted to bring to your attention is what they call the International Council for Local Environmental Initiatives,  local governments for sustainability,  and it's not," she says breathlessly. "It's Agenda 21 doing an end run around our states, senator and if Florida isn't careful the state legislators are going to become irrelevant."

"Yeah, I'm familiar with it," says LeMieux, "I've talked to a lot of groups here in Florida , some of the Tea party groups are really on to this issue. We need to make sure that government is run by the people that we elect and that they are making decisions which are based on the best interest of each of these communities and not tied into some international agenda. Something to be watchful for."

The last time Crowley Political Report wrote about Agenda 21 was when Gov. Rick Scott chimed in during a radio interview. He made it clear that he would not allow the United Nations to interfere with Florida property rights.

A quick Google search for Agenda 21 will lead one to scores of paranoid sites and posting about the evil plot behind Agenda 21.  And as we reported earlier, even Sarasota County is being swept up in the hysteria with some believing that the county's growth planning effort is part of a U.N. conspiracy.

Please note that true believers are convinced that Agenda 21 is a plan for One World Government.

Meanwhile, Adam Hasner, who is challenging LeMieux for the GOP nomination, warns his audiences about the impending threat to our nation from Sharia law - the paranoids love it. Read more about that issue here.

We're not sure how Sharia law might play into the One World Government but there are folks equally worried about Agenda 21 and Sharia law.

Saturday in Lakeland there will be the first  "Agenda 21 Statewide Meeting"  of "concerned activists" to allow folks to learn how to "dismantle the mighty progress already made by the left into every aspect of our communities, almost without notice."

Is this the new direction of Florida's Republican Party?