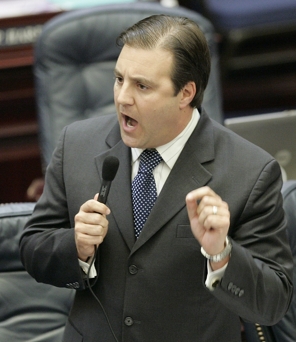 Whether he speaks to a newly formed Tea party group or the Orlando Young Republicans, Adam Hasner always warns about what he sees as one of America's biggest threats - Sharia law.

Hasner feels passionately about this issue whether he is speaking publicly or privately.

"Today there is an enemy and that enemy has a name and a defined mission. That enemy is Sharia compliant Islam," Hasner told a Tea party gathering last month. "And we cannot allow political correctness, multiculturalism or appeasement to cripple our defenses at home or abroad. Because this is a threat that not only exists on foreign soil, this is also a threat that exists from those who seek to destroy us from within."

He concluded with "Sharia law is not compatible with the constitution of the United States of America."

Is Sharia law really going to be an issue in Florida's U.S. Senate race? Apparently Hasner believes so. Or at the very least, he understands that this issue can appeal to the fears of some Republican voters.

Sharia law has been a bubbling issue for several years. The fact is that Sharia law is already a part of our nation's legal system and is particularly prevalent in cities with large Muslim populations. Courts have applied Sharia law in everything from commercial contracts to divorce settlements, wills and estates.

Marc Stern, a religion law expert at the American Jewish Committee, told NPR last year "that is no different from how religious laws and customs are already applied.

"And just as the Catholic Church didn't take over law when large numbers of Catholics [came] to the U.S., and Jewish law doesn't govern Jewish citizens, Sharia law is not going to govern, except voluntarily, the rights and responsibilities of Muslim citizens of the United States," Stern said.

He says when there's a conflict, U.S. law always wins. For example, when Orthodox Jews have asked judges to enforce their laws on divorce, the courts have refused to do it; they won't be involved in interpreting religion. In the same way, the government won't enforce Kosher food standards because it would violate the separation of church and state.

Stern says courts will honor agreements made under religious law, but not if they're grossly unfair. In Maryland, for example, a Muslim husband tried to give his wife almost nothing when they divorced, citing Sharia law.

"And in very sharp terms, the Maryland court said, 'This violates our fundamental sense of fairness and our fundamental commitment to equality of women, and we're not going to let you void that by reference to Islamic law,'" Stern says.

Our nation has long allowed religious beliefs to seep into our laws. Consider the Christian-led battle over the consumption of alcohol which led to a constitutional amendment and Prohibition.

Even today, Florida still has five dry counties. And not too many years ago, Blue Laws forbid shopping on Sundays because it was the Lord's Day.

In 1916, the Rev. Sidney Catts was elected Florida governor on an anti-Catholic platform. He didn't think much of Jews or blacks either but anti-Catholicism was all the rage.

At one point, it was said that Catts was telling folks that the Pope might invade Florida.

One could imagine that Catts would feel quite at home in the 2012 Florida U.S. Senate race.

There is a reason why the church and the state are separated in the constitution. While his allegations make a good point for debate, anything that is related to religion and spirituality should not be intertwined with concerns of the state.

Stop "The Great Anti-Sharia Freakout" by signing the petition at MoveOn.org . If you'd like to learn more before signing, join the LinkedIn discussion .